Presentation at the DFTA symposium "Alternative Packaging Materials" on 11.02.2021

There is a great need to offer products in ecological packaging and to avoid the spread of microplastics in the environment. Our Magaverde® biofiber paper should therefore not only be sustainably produced and fully biodegradable, but the printing inks and surface treatments used should also be so. The status of our products to date and the challenges were presented. 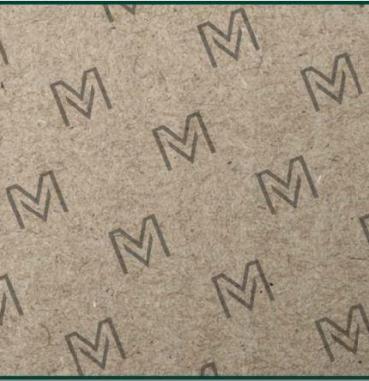 Poster contribution from GNS to the online DBFZ annual meeting on 16.09.2020

With the title "New plant nutrients and fiber products from biogas plant residues", we presented current results from our EU project SYSTEMIC and the new product brand Magaverde at the 2020 annual conference of the German Biomass Research Center (DBFZ-link see below) in Leipzig. 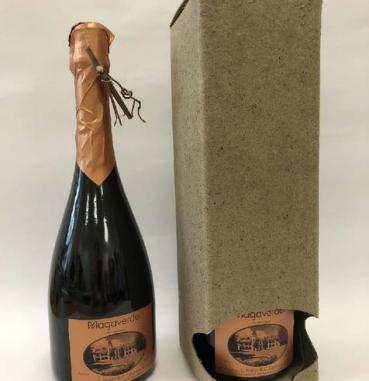 GNS is part of the Regional Growth Core abonocare®

The 1st abonocare conference aims at an intensive discourse between developers, users and authorities. In addition to exciting presentations, you can expect a lively discussion and exchange of ideas on innovations, novel processes, technologies and current issues. Use the conference as an information exchange and networking platform in the field of organic waste recycling. The project is funded by the German Federal Ministry of Education and Research. 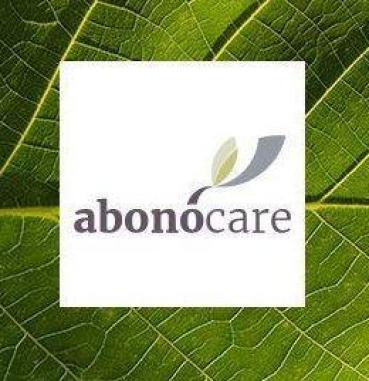 The working group "Energy and Environment" of the VDI Halle district association started with a new management team and the visit of the project HYPOS H2-Netz on 15.01.2020 in Bitterfeld-Wolfen.

In order to achieve the ambitious goals of the energy transition, technologies for the generation, storage and transport of energy must be developed. In addition to the existing natural gas infrastructure, additional supply infrastructures for green hydrogen will also be required. So far, however, there is hardly any experience in the distribution of pure hydrogen. Worldwide, only a few hydrogen pipelines exist, which consist exclusively of steel materials.

On January 15, 2020, the "Energy and Environment" working group of the Halle district association of the Association of German Engineers (VDI) invited participants to visit the "H2-Netz" project at the HYPOS research network in Bitterfeld-Wolfen, where the focus was on the testing of plastic pipelines, their suitability for modern installation methods, the connection and supply of a hydrogen consumer, and the distribution network structure including safety technology. The twenty-eight participants were able to view the installed test technology:

The working group "Environmental Technology" in the VDI Hallescher Bezirksverein thus started with new activities after a longer break and under the name "Energy and Environment". Our employee Dipl.-Ing. Thomas Meier has taken over the leadership of the working group together with Dipl.-Ing. Sigrid Klein. Thus, after a multitude of international activities, GNS is again increasingly involved in Halle. 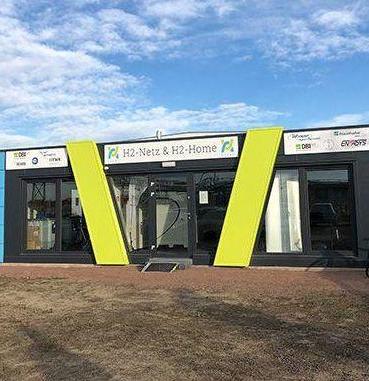 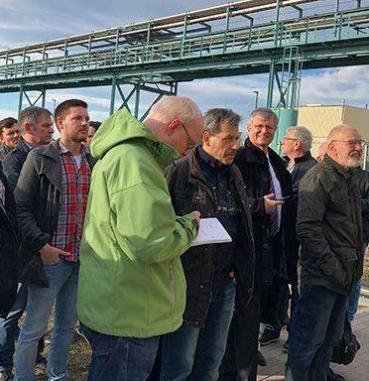 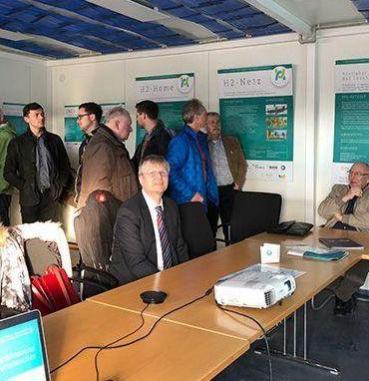 At the annual biogas congress of the Compost & Biogas Association Austria, Thomas Meier gave a presentation on the FaserPlus process for nutrient recovery from digestate and the results of sustainable fiber production from digestate. 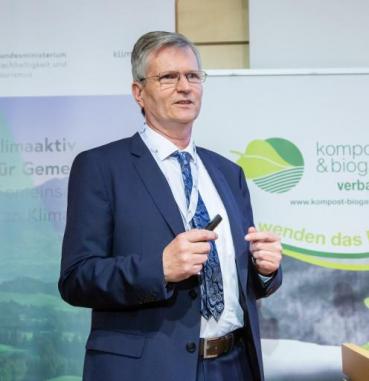 GNS has been headquartered in the Technology and Start-up Center in Halle (Saale) on the Weinberg Campus since 2012. The Weinberg Campus Technology Park is an excellent location for us as an innovative technology company. It offers us good opportunities for networking with other companies and the scientific institutes. In an interview we could present our company on the platform of the technology park.

Interview with Dr. Ute Bauermeister in the series "Companies introduce themselves" of the Weinberg Campus Technology Park. 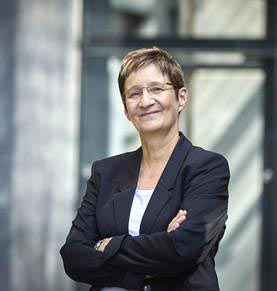 Ways to recover nutrients such as nitrogen, phosphorus and potassium from biowaste and digestate are in demand. Mineral nitrogen fertilizers, high-quality fibers and phosphoric fractions are recovered at a plant in Lower Saxony. 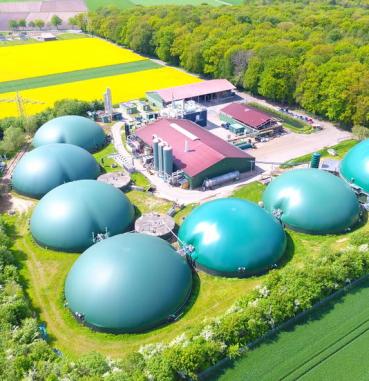 Technical article by GNS in the trade magazine "Energy from Plants" Volume 23, Issue 4, 2019. 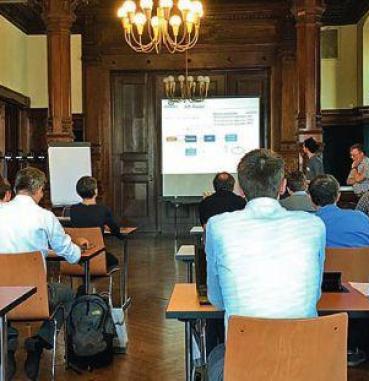 Do-gooders from Halle, newspaper article on SYSTEMIC meeting in Halle, 07.06.2019

Newspaper article in the Mitteldeutsche Zeitung from June 7, 2019 about the meeting of the EU project SYSTEMIC in Halle, which was organized by GNS. 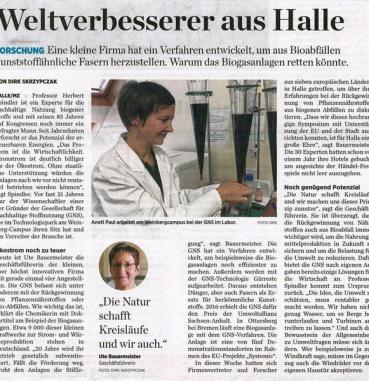 With a keynote speech on new value chains for biogas plants, GNS answered the questions of practitioners on 26.09.2018 in Unsleben (Rhöhn-Grabfeld). Further dates followed in October 2018 until March 2019.

The joint project "Potential Fields of a Rural Bioeconomy" by the IÖW and IfaS is dedicated to the evaluation and development of concrete value chains of a rural bioeconomy.

Regional workshops and a final workshop have now taken place at several locations in Germany, at which GNS was present in part with expert presentations and as a discussion partner.

To the Rural Bioeconomy 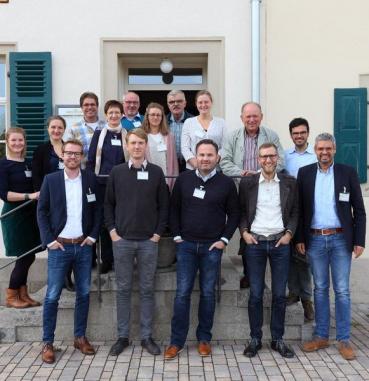 GNS presents itself at the Biogas Conference in Heiden on 30.08.2018. Under the topic Biogas from Straw we present our FaserPlus process with current results in a lecture. At the accompanying exhibition, we can provide expert advice on all questions of digestate processing and new opportunities for adding value to biogas plants. 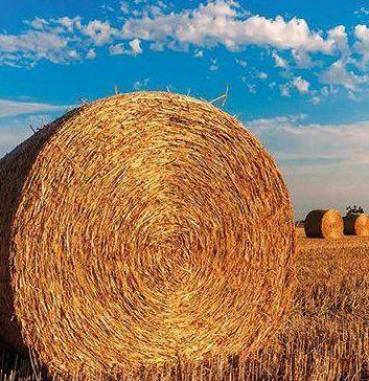 20 years of innovative thinking and acting are behind us. We celebrate this on April 26, 2018 at the Biozentrum Halle together with invited partners and customers.

Our heartfelt thanks go to all customers, partners and fellow campaigners for the trust, the good cooperation and the joy with which we were able to work on exciting projects and topics. We look forward to many more years together! We have newly compiled our service profile for you in our image brochure. 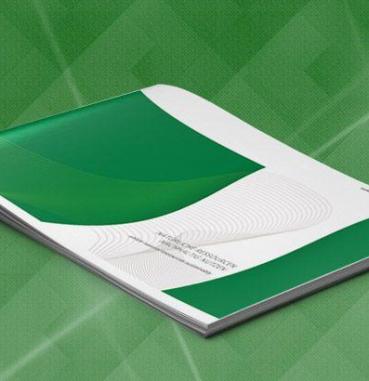 A highlight of the trade fair appearance was the visit of the Saxon State Minister for the Environment and Agriculture, Thomas Schmidt, to the TKoR network booth. Minister of State Schmidt informed himself about the work of the network on 07.04.2017 with Dr. Ute Bauermeister, GNS GmbH, Dr. Gerd Arnold, evermind GmbH, as well as Claudyn Kidszun, LAV GmbH.

From 05 to 07 April 2017, 3,200 trade visitors came to the Glass Hall of the Leipzig Trade Fair to find out about current topics and innovations at terratec and to establish contacts with other industry representatives. 128 exhibitors from six countries took part in the top-class technical program and exhibition, including numerous well-known manufacturers and institutions in the waste and recycling sectors.

The TKoR network participated with great success at the industry trade fair terratec in Leipzig. The Technology and Competence Center for Organic Residue Recycling, managed by Leipzig-based evermind GmbH, was represented with its own booth at the trade fair for the waste disposal, recycling and resource management industry. 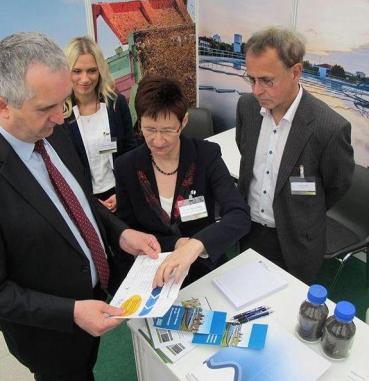 At the forum and exhibition EFIB, which takes place for the 9th time, we will be represented at the booth of the BioEconomy Cluster Mitteldeutschland on October 18-20, 2016.

The European Forum for Industrial Biotechnology and the Bioeconomy EFIB is one of the most important events for bioeconomy and biobased industry in Europe, where business, politics and biotechnology meet. More than 650 participants from 34 nations are expected to attend.

Over three days, decision-makers, brand owners and biotechnology experts will present, discuss the latest developments in the industry and establish international and interdisciplinary contacts. More than 100 lectures and pre-event workshops will provide approaches for expanding the bio-based economy and breaking new technological ground.

We will provide information on the following topics at the BioEconomy Cluster booth: 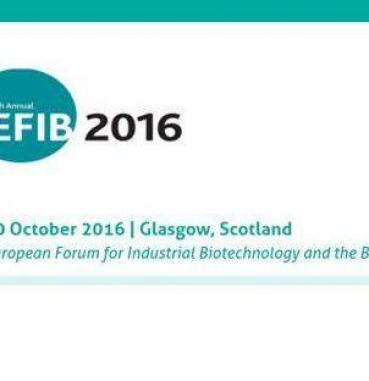 Fiber production from biogas plants applicable on a large scale 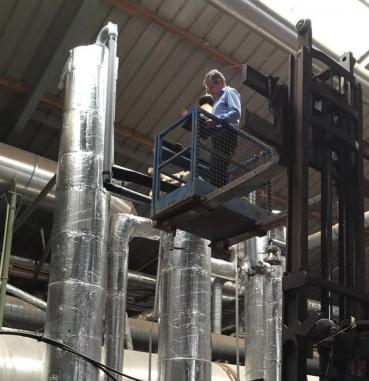